Our trip to Winterfell

Dear Mummy, after visiting Mount Stewart on our recent trip to Northern Ireland we tracked down where they filmed scenes from Game of Thrones. Season 1 of the TV adaptation used the courtyard of Castle Ward in County Down, Northern Ireland, for Winterfell. 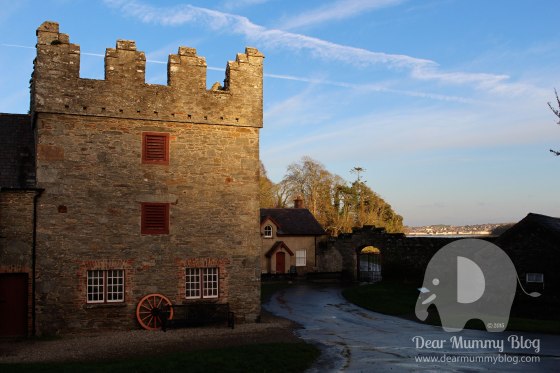 My mummy and Daddy are huge Game of Thrones fans and even my Grandma was an extra in Season 2! So it was an absolute must when we visited Northern Ireland.

So we’re heading to Winterfell, home of the Starks. Well actually it’s called Castle Ward and home to The National Trust.

We visited Castle Ward’s neighbour Mount Stewart a couple of days ago and had a lovely afternoon.

Today is filled with the same excitement about attending a new National Trust property.

Castle Ward is on the other side of the lough, 2-3 miles from Strangford Town. It takes around 45 minutes from Belfast and I nap on the way there.

We arrive in Strangford first to have lunch and see the little fishing port.

A warm welcome greets us at The Cuan Hotel where we stay by the fire and eat a great lunch. We study the local maps and watch the little car ferry travel across the waterway known as The Narrows to Portaferry. The ferry crosses every 30 minutes and only lasts 8 minutes.

Strangford Harbour, Lough and The Narrows are home to a variety of wildlife such as Crabs, Lobsters, Sharks, Seals and the odd killer whale and humpback have even been spotted! Wow that’s a lot of wildlife to see!

This place is steeped in history too. There are many Tower Houses dotted around, their big turrets visible from the roads.

We see the sign for Castle Ward and head down the long drive pass the main house and into the car park.

It’s not what we expected as we roll up to the estate through the rolling fields with views over Strangford Lough. It’s a cold and bright December day in Northern Ireland. The most interesting aspect of Castle Ward is its dual architecture from the 16th-century fortified tower house (used as inspiration for Winterfell filming and CGI) to the 18th-century house.

There’s a little children’s playground next to the information point and only the grounds are open today (we knew this before we left) so we miss out on seeing the cafe and main house.

There is enough to see and do though. We trundle off to the farmyard and the bank side of Strangford Lough.

Walking down the path we can see the turrets of the old farmyard. This is where they filmed some of the first season of Game of Thrones. Through the iron gates you can see the lough and they also have a little farm area with goats and chickens.

The light is fading…so we take the woodland path back up and get a good glimpse of the 18th-century house, I play for a while in the play park before heading home. Well worth a visit if you are a Game of Thrones fan, enjoy beautiful scenery and a good old walk.

A lovely day in Strangford and Castle Ward.

Can’t wait to return in the summer to have a good explore when it’s not so cold! Brrrrrr.

4 thoughts on “Our trip to Winterfell – Game of Thrones”

❤️Happy World Book Day! ❤️ I’ve been having lots of fun reading my favourite books! 📖 Did you dress up as one of your favourite book characters for #worldbookday2021 Let me know in the comments ⬇️ #worldbookday #diycostume @worldbookdaysocial #lydiamonks #sharingashell #juliadonaldson #sharingashellactivity #books @worldbookdaycostume
I’m a kid! Get me out of here!! 😆 Seriously fed up of lockdown now and the end is in sight! 🤩 I’m wondering what it will be like 3 months from now! ☀️ Freedom?! 🤷‍♀️ Name one thing you are looking forward to below ⬇️ I’m looking forward to going camping 🏕 and hopefully attending a festival!🤞#endoflockdown #lockdown2021 #lockdownlife #escapetothecountry
[AD] Yes, we’re still practicing at hair braiding! 😆 My mummy is all fingers and thumbs so is finding the how to videos that @trenza_braidbar do very inspiring! 😍 Practice makes perfect and she’s determined to get braiding down to a fine art before the summer. ☀️ Can you guys braid? 🌈 I must admit it’s been great practising on a styling head as opposed to a wriggling person! 🙈 I love the @trenza_braidbar Learn to Braid at Home Kit which has everything you need to become a hair style guru! ❤️ Check out their page for more inspo! #hairstyles #kidshair #stylinghead #kidshairstyles #braids #howto #braidinghair #trenzabraidbar
[AD] Snug as a bug in a rug! ❤️ Dreamtex is working with Sainsbury’s on a great World Book Day range to help make storytelling at bedtime more fun!
[AD] I’m a massive fan of fairies 🧚🏻‍♂️ and often hunt for them in the woods and at the bottom of my garden. 😍 But now Bright Fairy Friends can be discovered in store and online at Tesco!
[AD] Magic! ✨ It’s Zuru’s Oosh Potions Slime Surprise from @zuru.toys ✨ I can’t wait to make magical DIY slime with my glow in the dark wand! ⭐️ There's everything you need inside these bottles to make awesome slime! 🧙 There are 4 different magic potion bottles to collect, each with two surprise potions to make inside! 👀 Keep your eyes peeled for my blog review and videos coming soon! #zurupotions #zurutoys #slime #slimetoys #zuru #slimemaking #zurupotionslimesurprise #slimesurprise
[AD] We’ve had a couple of quiet days, as my mummy was a bit poorly 🤒 after her jab 💉 so I decided to make her some colourful artwork to cheer her up. 🌈 I also made some painted stones to brighten up the neighbourhood too! 💙 I used my awesome @littlebrianpaintsticks and made thank you stones! ❤️ Keep your eyes peeled for my latest instalment of #BellaCreates coming on YouTube soon! 🌈 #paintedstones #cheeringup #paintingstones #littlebrianpaintsticks #kidscrafts #artwork #kidsart
[AD] 🎉Happy Mail! 🎉 It’s Kids Fashion Week! #gkfw #DAFFashionWeek 💕 I’ve teamed up with @designafriendofficial to bring you an exciting fashion show with my beautiful DesignaFriend dolls in their stylish outfits! 📸 Stay tuned for my catwalk shows on Reels! I’m just getting started! 😆 You can join in the fun - there’s a DesignaFriend Fashion Sketchbook to download for FREE! Visit the DesignaFriend page at @argos 💕 it’s contains some great activities for #halfterm and the #weekend ✏️ #kidsfashionweek #catwalkvibes #kidsfashion #designafriend #minimode #dearmummyblog #fashionshow #designafriendofficial
[AD] Check out my BRAND NEW VIP Pets Mini Fans! There are six different fan squads to collect - Pinkilicious, Disco Divas, Queen Ladies, Fantasy Club, Dream Team and Rainbow Surfers. I opened a RARE one! 🤩 Each come with their own hair accessories, heart case plus a comb to help keep their super long 20cm locks in check!
Trying to stay positive this week! 💕 It’s less than 2 weeks until March and the days will get longer, the sun will shine ☀️ and the flowers will begin to bloom! 🙌 It’s the start of new beginnings! 🌼 I’ve already spotted some snowdrops and crocuses! 🌸 Are you looking forward to Spring? 💐 #springiscoming #holdtight #feburary #springtime #staypositive #halfterm