Dear Mummy, I’ve only been allowed to pop in and see you a couple of times since you were admitted to Basingstoke hospital a couple of weeks ago. But every time I’ve been up to your ward I’m amazed by the different characters there are living there. It’s really like being in your own soap opera! Here’s a list of the people we’ve met…

You know the one, she’s the patient that’s a hypochondriac, she’s a compulsive worrier and a defeatist. Not only does she monopolises the nurses time but she relays the same story of her condition to anyone that catches her eye. You can’t escape her, especially if she’s in the bed next to you. All you can do is put your ear plugs in, as she racks up hospital credits (£5 a day) calling her family and friends to tell them, and the rest of the ward, of her woes.

A sweet old lady that’s been on the ward for months, all the staff and patients know her and respect her. She gets special privileges, like long walks off the ward, afternoon tea that the nurses bring in for her and 1-2-1 care. But you can’t begrudge her because she’s so lovely and friendly. She never talks about herself and is the complete opposite of The Attention Seeker.

This nurse scares you, she doesn’t beat around the bush. Stern in her mannerisms and she holds the key to the drugs locker. Don’t cross her EVER, she holds the papers to your release. Clearly someone that gets things done! Just wish she was a Doctor sometimes.

He’s the softly spoken nurse, that even when he’s up against the most angry of patients remains calm and collected. Nothing is too much trouble for this guy and he often gets overlooked by his colleagues. He’s genuine and caring.

Walking around with their white shirts and chinos, they are the brown shoe brigade, fresh out of med school, constantly staring at screens and clipboards. They talk at you and their eyes never focus on yours. Always looking wary and on edge they spurt long complicated sentences and you can never pin them down. You spend the majority of your time waiting for these guys and like buses, they all come at once with an air of authority.

My mummy is guilty of this trait, she’s the Winona Ryder (Girl, Interrupted), the girl who stares out of the window, not really wanting to be sociable with the other patients. She’s got her head stuck in a book or pretending to sleep just to get through day. She’s resentful of the zero privacy on the ward, with beds stacked up next to each other and daily fights with nurses to keep her curtains closed. 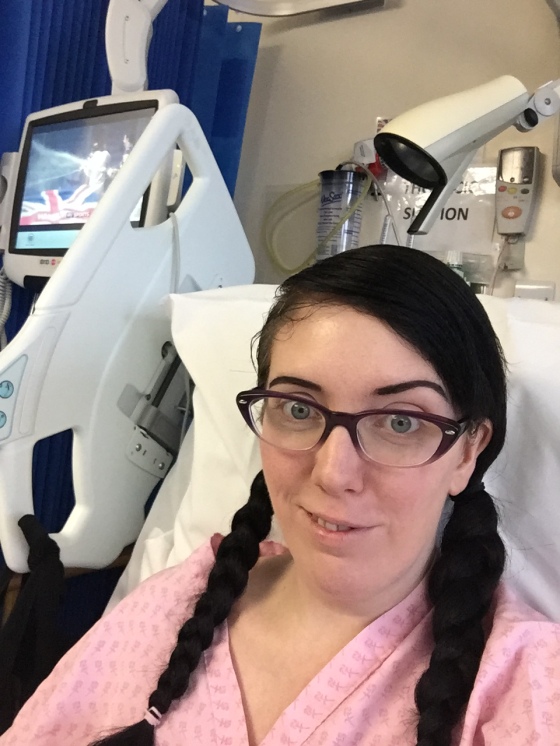 She’s the over friendly nurse that’s not scared to pull you to the side and ask if you are ok. She relates as best she knows how, with a sympathetic ear. She’s also the nurse that helps you through the whole ordeal of being on ward. 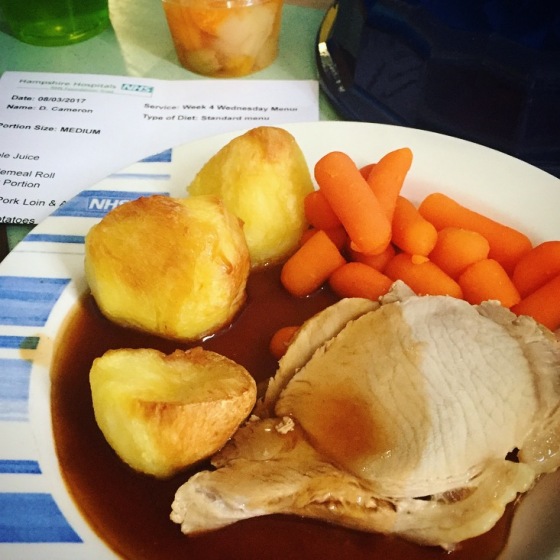 He’s a regimented colonel of meal times, his only concern is making sure patients are fed and on time. Even interrupting the most sensitive of conversations to make sure you’ve ordered you breakfast for the follow day. This guy is on a mission. He’s also the man you go to if you need help with I.T or you want something non-legit brought onto the ward. He’s like a cross between a prison guard and a mafia boss and know EVERYONES secrets. 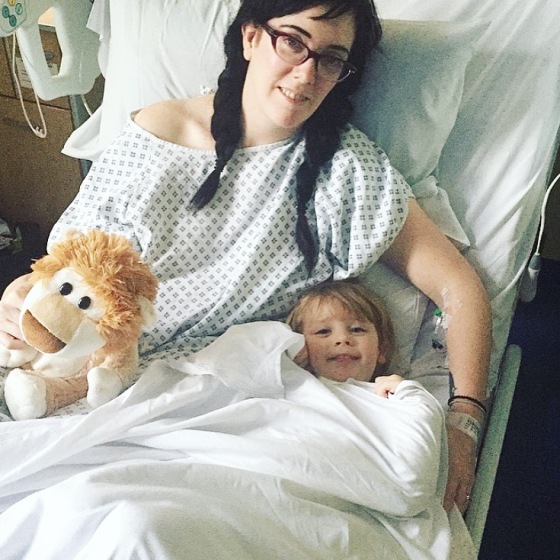 We only see these guys late at night pushing beds and wheelchairs around empty corridors. Like something out of Top Gear, when people aren’t looking they race around the hospital wheeling sleeping patients to X-ray departments and theatre. Their headphones in and radios on, they know all the short cuts that lead into the bowels of the building.

The most resented of all the characters is a repeat offender. He’s the emergency button pusher. The guy that pushes it every 20 minutes tearing people from their sleep during the night. Reasons range from the most simple cushion adjustment to the more complex top up of water. Why he can’t stack up a list of requests and do it all in one hit – we don’t know. Maybe he just enjoys seeing the nurses run to his aid!

Its been a rollercoaster of a stay in hospital and my mummy has found it extremely frustrating being institutionalised. She got anxious being wheeled down to Costa (and normality) and got so upset that she had to turn back to the ward. She’s had a chest drain attached to her ribcage now for 10 days and just wants to be released. She’s lost track of the days, time and seasons. Living in a ward society is horrible, worse than prison she imagines, as she has no freedom or control over when she sleeps, eats or leaves the ward.

Lets pray for her release soon!

40 thoughts on “10 Types of People on a Hospital Ward”

[AD] 🎉 I need all the help I can get organising a surprise birthday party! 🎉 Thankfully Birthday Bear 🍰 is on hand to make sure I don’t drop the cake! 😅 I’m loving my brand new party planner extrodanaire from @carebears 💛 It’s Birthday Bear the sweetest bear and he smells of real cake! 🍰 Vanilla frosting and cupcake! 🧁 Have you guessed who’s birthday we’re celebrating yet? *I’ll give you a hint* 💙🌨 Our Youtube video is coming soon... #CareBears #Cake #BirthdayBear #partytime #basicfuntoys #BasicFunUK #partyideas #PartyPlanning #CareBearsBirthdayBear
🤩 Rockstar! 🤩 Well, in my head that’s how I see it! 🎶 I had guitar and singing lessons 🎸 and it’s great to be in the studio having fun and learning. 🎤 Less chatting and more singing from me hopefully! I do like a natter! 😆 #youngperformer #spotlight #learningnewskills #musiclessons #southampton #kidsinger #learningtosing #singinglessons #befordplace #kidsguitar #kidsmusic
[AD] 🎉 Extreme Happy Mail! 🎉 I love crafting and this has definitely cheered me up on a Monday! ❤️ I can’t wait to make some cool creations with Plasticine! 🙌 Thanks @flair_gp for sending this through to me! 👀 Keep your eyes peeled for my creations and videos coming soon! 🤔 What do you think I’m going to make?! *I’ll give you a clue - it’s animal based* 🦒🦓🐍🐘🐆🐅 #CreativePlayWithFlair #plasticine #plasticineart #BellaCreates #plasticinemodels #dearmummyblog
Throwing myself into the new week! 🙌 What exciting stuff do you have planned? 💛 I’m looking forward to having my guitar and singing lessons again this week! 🎶 Might even take another detour to @westquay afterwards to grab some yummy food and do some shopping! 🎉#westquay #jumpingforjoy #soton #westquaysouthampton #hampshire #mondaymotivation #southampton #westquay #shopping #kidyoutuber #dearmummyblog
[AD] 🎉 Look who we discovered hidden in their cute rainbow burritos! 🌯 It’s Purplito and Shineito two of the most adorable Cutetitos Unicornitos! 🌈 I love them so much! 💜 I even got a Purplito twin! 😍 Check out my unboxing reel to see them in action. 👀 or scroll to see more > 🌈🌈#basicfunuk #cutetitos #unicornitos #surprise #basicfuntoys #happymail @basicfunuk @basicfuntoys @cutetitos #toyunboxing #newtoys2021 #dearmummyblog
🎉 I’ve got that Friday Feeling! 🎉 We’re gearing up for a summer of fun! But still have a lot of garden jobs to do this weekend before BBQ season arrives! ☀️ Fingers crossed the weather improves soon! 🤞 Heard there was snow in Scotland this week! ☃️ That’s crazy for May time! 🌸 Enjoy your weekends everyone! 🙌 #fridayvibes #friday #itstheweekend #smile #colourfulfashion
[AD] I’m ready for a summer full of fun with my Gazillion Bubbles! ☀️ Check out my brand new YouTube video and blog post to see these cool bubble toys in action! 👀 #linkinbio Which one is your favourite?
[AD] 🎉 Happy Mail 🎉 I can’t wait to see what’s in this colourful box! ☺️ I have a feeling it’s going to be filled with joy - in the shape of brand new Cutetitos Unicornitos and some other surprisitos! 🦄 Keep your eyes peeled for my unboxing video coming soon.... 👀 #basicfunuk #cutetitos #unicornitos #surprise #basicfuntoys #happymail
Managed to get a hockey session in 🏑 before the bad weather hit! ☔️ Last night was so windy on the coast 💨 I thought the chimney was going to take off like a rocket! 🚀 Really hoping the sunny weather returns for next May Bank Holiday! ☀️ Hope you all have a great week! 💙 #mondayvibes #itstuesday #fieldhockey #southampton #hockey #southamptonhockeyclub #sports #dearmummyblog
[AD] We’re sprinkling a little magic on this wet and windy ☔️ Bank Holiday Monday with Harry Potter Mashems! #mashemsmagic ⚡️ I’m loving these super fun collectible squishy and stretchy characters! ⚡️ #characterkidz #mashemsmagic @charactertoys #harrypotter #harrypotterfan #harrypotterworld #harrypottertoys #harrypottermagic #mashems #mashemsharrypotter #collectibles #collectables #toys #basicfun #basicfuntoys #surprise #harrypotterday #hermionegranger #potterhead #surprisetoys #dearmummyblog