Dear Mummy, we stumbled on a hidden gem in the capital last week. It’s called The Horniman Museum and is located in Forest Hill, South East London. The museum opened in 1901 and was designed by Charles Harrison Townsend. Frederick John Horseman, a Victorian tea trader and philanthropist, started up the museum, by collecting objects, specimens and artefacts from around the world in 1860. By starting his collection and showcasing it he has enriched the lives of the local community and tourists alike. The Horniman family continued to take an active interest in the museum donating objects and large collections of books to the library. It’s a beautiful looking building with a tall clock tower and lovely limestone walls and has real kerb appeal. We visited on a bright and sunny day and it looked very impressive against the blue sky.

We parked next to Forest Hill train station as the parking was limited. Public transport is highly recommended due to the nature of traffic around this built up area and the residential area. This makes it difficult for people outside the borough to visit and my mummy only drove because we were visiting relatives afterwards and the trains weren’t running.

Entrance to the museum and gardens is FREE but a charge is made for some major temporary exhibitions and the aquarium. The Horniman Museum won the Best Family Friendly Museum award in 2013, so we were eager to discover this treasure trove of curiosities.

Horniman Museam specialises in anthropology, natural history and musical instruments and has a collection of 350,000 objects. A lot of the exotic artefacts have been bought back by the Horniman family and it has a real Indiana Jones-style feel to the galleries with a mixture of exotic masks, stuffed animals, ritual pieces from far away lands and strange instruments from different cultures. We were amazed at the array of content in this museum. The museum didn’t really focus on just one thing which made it great for us, as my attention span is short, so each cabinet contained something else exciting and new. 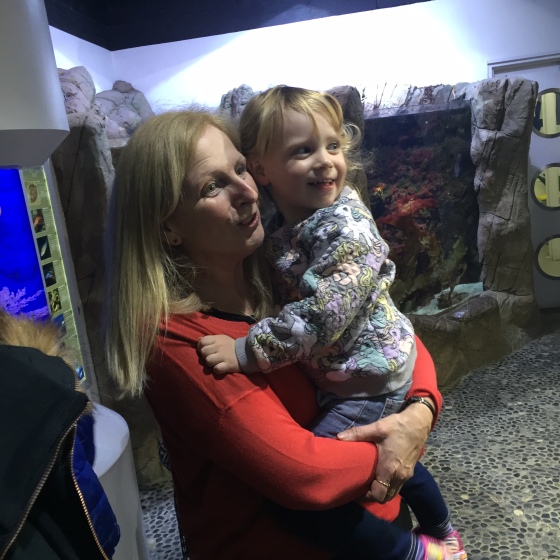 There were some bizarre exhibits, including stuffed heads of wolves and dogs, which could be quite scary for younger visitors. I was fascinated by some of the stuffed animal displays especially the monkeys and apes. The Canadian walrus was my favourite, however I did try to scale the iceberg plinth he sat on! We enjoyed walking around the African Worlds exhibit looking at all the African art and culture. Bright colours and unusual textures were a real feast for the eyes.

We flittered from one exhibition to the next and my mummy was cool with that, my little eyes taking in a ray of visual information and spectacle. The Centenary Gallery was fascinating and we were all memorised by the death dance mask in the shape of a crocodile from the Torres Strait Islands. 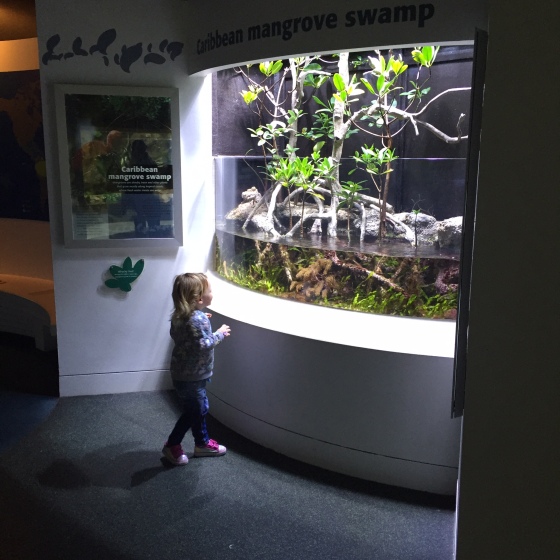 After visiting the majority of the exhibits on the ground floor, we walked downstairs to the basement of the museum where the small aquarium was located. There were fifteen exhibits which showcased aquatic environments from around the globe, ranging from the British coastline to Fijian coral reefs. I spent ages watching the jelly fish floating around and looking at the Caribbean mango swamp.

The aquarium was redeveloped in 2006, specifically with children in mind, and has low-level viewing windows for smaller visitors, which was great for me. There were some steps provided in case I needed to get a better view and they were dotted around the exhibits.

However we saved the best exhibition for last – the Dinosaurs: Monster Families. It was an interactive exhibit featuring the fascinating world of prehistoric dinosaurs, how they looked after their eggs, nests and their young as well as where they lived and how long they lived for.

It features life-size models, skulls, bones and eggs from around the world as well as bird and crocodile artefacts and exhibits from the museum’s own collection which shows the relationship between the animals and birds alive today. The brightly coloured walls and artwork by artist Luis V Rey was amazing and it had a very family friendly vibe about the exhibition.

Among our highlights of the visit was seeing a life-size model of a Tarbosaurus which looked a bit like a baby Tyrannosaurus Rex.  I was so impressed I wanted to get a closer look – I still haven’t mastered the art of attending museums.

I was fascinated by all the eggs dotted around, as I’m bit of a scrambled and ‘bang bang’ egg fan and happily posed by my favourite specimens. Alongside bird and crocodile specimens from the Horniman’s family collection, we also spotted a fossilised egg of the extinct Elephant Bird, from Sir David Attenborough’s private collection.

Elephant Birds were some of the tallest birds ever to have lived and stood up to three metres high. They laid eggs that measured more than 30cm in length. There is also some film footage of Sir David and the egg which he acquired on a visit to Madagascar in 1960 which my mummy enjoys watching.

One of the most popular parts of the exhibition for toddlers like me was the sandpit area. No ordinary sandpit though – this was an excavation area where bones and eggs were hidden for little explorers to find. I spent ages playing…*cough* I mean digging in this large pit full of rubber sand uncovering dinosaur bones and eggs.

We loved the fact that in a corner of this exhibition space there was a colouring-in station, dinosaur toys and puzzles and a dressing up box to get stuck into. We’d highly recommend visiting this temporary exhibition for any dinosaur lovers out there and it is open daily between 10.30am and 5.30pm until Sunday 30 October 2016. You do have to pay to see this area of the Horniman Museum though and tickets cost £7 (adult), £4 (child over 3), £17 (family). Free for members.

Afterwards we went outside to enjoy the sunshine and have something to eat at the terrace cafe. The museum is set in 16 acres (65,000 m²) of gardens and the views over central London were amazing, we could just make out the hazy skyline scattered with high rises and skyscrapers.

There is a Grade II listed conservatory from 1894 which was moved from Horniman’s family house in Croydon to the present site in the 1980s. I pretended to waltz around like Cinderella on the bandstand and spent time following my Aunty around the nature trail chasing her around a large oak tree with stick wands. I inspected the farm animals in the small enclosure in the gardens and had great fun banging the upcycled pipes and wind chimes in the sound garden. My mummy sat by the ornamental garden and watched the world go by. On the day we visited there was a little Saturday food market happening on the grounds too.

The Horniman Museum isn’t the biggest museum, but you can easily spend a good few hours seeing all the exhibits. We made a day of it by looking around the museum and exploring the gardens. On a sunny day we’d recommend taking a picnic with you to enjoy in the grounds. We’ll certainly be back to London to visit this museum, but next time we won’t drive!

5 thoughts on “The Horniman Museum”

[AD] Oh dear! 🤦🏼‍♀️ I forgot Grumpy Bears Birthday recently... ⛈ Thankfully NEW Birthday Bear is on hand to help me plan a party for him! 🙌 #birthdaycake #birthdaybear #CareBearsBirthdayBear #CareBears #BirthdayBear #BasicFunUK
🎉 At last it’s the weekend! 🎉 It’s been the longest week ever and we definitely deserve a treat to celebrate! 🙌 I came across the most yummy donuts @stonegrounddonuts 😋 I’m a massive fan of sweet treats and everything in moderation right? 👍 What sweet treats do you guys like? 🍩🍦🍬🍰 Let me know below! #donuts #sweettreats #donutsofinstagram #stonegrounddonuts #fridayfeeling #yummy #southampton #westquaysouthampton
[AD] 🎉 I need all the help I can get organising a surprise birthday party! 🎉 Thankfully Birthday Bear 🍰 is on hand to make sure I don’t drop the cake! 😅 I’m loving my brand new party planner extrodanaire from @carebears 💛 It’s Birthday Bear the sweetest bear and he smells of real cake! 🍰 Vanilla frosting and cupcake! 🧁 Have you guessed who’s birthday we’re celebrating yet? *I’ll give you a hint* 💙🌨 Our Youtube video is coming soon... #CareBears #Cake #BirthdayBear #partytime #basicfuntoys #BasicFunUK #partyideas #PartyPlanning #CareBearsBirthdayBear
🤩 Rockstar! 🤩 Well, in my head that’s how I see it! 🎶 I had guitar and singing lessons 🎸 and it’s great to be in the studio having fun and learning. 🎤 Less chatting and more singing from me hopefully! I do like a natter! 😆 #youngperformer #spotlight #learningnewskills #musiclessons #southampton #kidsinger #learningtosing #singinglessons #befordplace #kidsguitar #kidsmusic
[AD] 🎉 Extreme Happy Mail! 🎉 I love crafting and this has definitely cheered me up on a Monday! ❤️ I can’t wait to make some cool creations with Plasticine! 🙌 Thanks @flair_gp for sending this through to me! 👀 Keep your eyes peeled for my creations and videos coming soon! 🤔 What do you think I’m going to make?! *I’ll give you a clue - it’s animal based* 🦒🦓🐍🐘🐆🐅 #CreativePlayWithFlair #plasticine #plasticineart #BellaCreates #plasticinemodels #dearmummyblog
Throwing myself into the new week! 🙌 What exciting stuff do you have planned? 💛 I’m looking forward to having my guitar and singing lessons again this week! 🎶 Might even take another detour to @westquay afterwards to grab some yummy food and do some shopping! 🎉#westquay #jumpingforjoy #soton #westquaysouthampton #hampshire #mondaymotivation #southampton #westquay #shopping #kidyoutuber #dearmummyblog
[AD] 🎉 Look who we discovered hidden in their cute rainbow burritos! 🌯 It’s Purplito and Shineito two of the most adorable Cutetitos Unicornitos! 🌈 I love them so much! 💜 I even got a Purplito twin! 😍 Check out my unboxing reel to see them in action. 👀 or scroll to see more > 🌈🌈#basicfunuk #cutetitos #unicornitos #surprise #basicfuntoys #happymail @basicfunuk @basicfuntoys @cutetitos #toyunboxing #newtoys2021 #dearmummyblog
🎉 I’ve got that Friday Feeling! 🎉 We’re gearing up for a summer of fun! But still have a lot of garden jobs to do this weekend before BBQ season arrives! ☀️ Fingers crossed the weather improves soon! 🤞 Heard there was snow in Scotland this week! ☃️ That’s crazy for May time! 🌸 Enjoy your weekends everyone! 🙌 #fridayvibes #friday #itstheweekend #smile #colourfulfashion
[AD] I’m ready for a summer full of fun with my Gazillion Bubbles! ☀️ Check out my brand new YouTube video and blog post to see these cool bubble toys in action! 👀 #linkinbio Which one is your favourite?
[AD] 🎉 Happy Mail 🎉 I can’t wait to see what’s in this colourful box! ☺️ I have a feeling it’s going to be filled with joy - in the shape of brand new Cutetitos Unicornitos and some other surprisitos! 🦄 Keep your eyes peeled for my unboxing video coming soon.... 👀 #basicfunuk #cutetitos #unicornitos #surprise #basicfuntoys #happymail