Dear Mummy, I’m a real fan of Disney Jnr on telly and love catching up with my favourite shows when I finish nursery during the week. One show that I’m particularly fond of is The Lion guard, a spin-off of Disney’s original The Lion King. The Lion Guard cartoon follows a lion cub called Kion, the second-born cub of Simba and Nala, as he takes on the role of leader of the Lion Guard, a team of animals tasked with preserving the pridelands and the Circle of Life. They come across some naughty characters in the show determined to interfere with the happy balance of the pridelands. One of these ‘villains’ is Janja, the hyena. 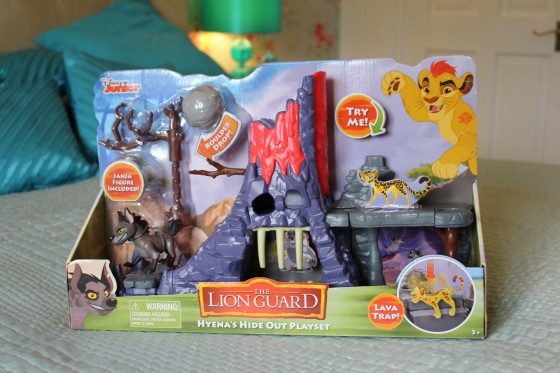 We were sent to review Janja’s Hide Out Playset from the outlands. A bad place from the cartoon, a place where the Lion Guard keep the Hyenas, the Vultures and the Jackels at bay on the edge of the pridelands. This playset sure looks mean and dangerous. There is a scary bone cave trap, collapsible floor to drop any figure into the lava river, a spinning pole tree to make figures dizzy, and a hot lava wall which slides up and down to foil any escape plans. It’s all set around a large volcano. There are lots of moveable pieces and you can pull down on a branch to launch the boulder and keep enemies at bay. It comes in two parts which can be linked together or kept separate, perfect for when I have friends round and we want to play and share together. The packaging is rather colourful and depicts characters from the cartoon. 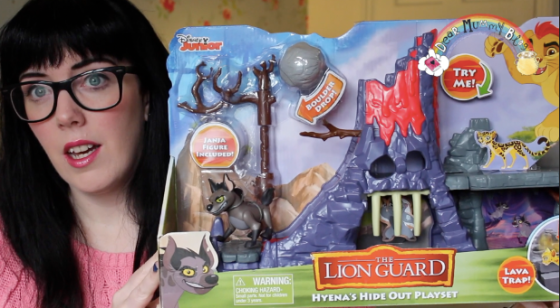 The playset comes with one figure, Janja the Hyena and I can’t wait to pick up the rest of his motley crew and other characters from the Lion Guard. This is a new playset from Just Play/Flair and I can see myself having lots of fun with it, recreating Lion Guard scenes from the cartoon! This is the first play set I’ve had from one of my favourite shows and my mummy was impressed that I took to it straight away. I’m a girl who loves girly stuff so this playset appealed to my darker side!

The Hyena’s Hide Out Playset is priced £24.99 and available from Amazon and all good toy shops. It’s suitable for children aged 3-6 and I had great fun playing with mummy.

Do you want to see it in action? Then watch our vlog!

Did you like playing with villains or heroes when you were a kid?

Disclaimer: We were sent the product in order to write an honest review. All opinions and footage is our own.