Dear Mummy, it seems the summer is officially over *sob*. We attended Into The Trees which marked our last festival of the season. Into the Trees is in it’s third year and organised by the team behind Elderflower Fields on the same site. It is held in the beautiful Pippingford Park in Nutley, East Sussex and runs over the first weekend in September. Advanced tickets were only £22 per family or £28 on the gate for a full day of outdoor fun. Even though the forecast predicted rain on the Saturday we decided to head to Sussex and escape the daily grind and hustle of the city.

We arrived shortly after midday due to heavy traffic on the M25 and M23 and with a couple of hours in the car I was raring to go and get out into the fresh air. My mummy had the foresight to pack wet weather gear and even though the sun was shinning dark thunder clouds loomed on the horizon.

It was a smaller festival than we’ve visited recently, however Into The Trees was very chilled and perfect for little legs. The festival cart was ditched as I was ready to climb, run and have fun exploring. On entrance to the site friendly staff welcomed us and showed us the map and explained the activities to try. We did have to buy tokens from the welcome tent in order partake in some of the activities like the Zip Wire and the Woodland Tribe activity but it was only a couple of pounds. Watch our jam-packed video to see what we got up to!

Our first stop was the Pewter Casting stand where we met Carl (AKA Tractor) and Allan (AKA Big Al) who were experts in medieval and country crafts. We used a cuttlefish bone to make a mould by hand and watched as molten pewter was poured into it.  At the end of the festival we returned after it had cooled to see the mould opened up with our finished object to take away home with us along with the cuttlefish bone. This activity was an extra £5 but well worth the money by making something handmade and so beautiful it was a lovely keepsake of the day. Both Tractor and Big Al were superstars having to deal with the elements of a thunder-storm half way through the festival to make these for us.

Just before the rain started we made a beeline for the pond dipping at the far end of the site. Pippingford Park is home to a whole host of wildlife, much of it under water. So I grabbed a net and a tray and the Sussex Wildlife Trust staff at the stand helped me identify what I found. There was quite a queue at one point with not enough nets for everyone so I had to be patient. Hopefully next year they will be a bit more prepared for the amount of young visitors wanting to have a go!

I had the most fun at Woodland Tribe and it seemed everyone else did too as they ran out of hammers for us little ones! I helped create a natural playground and loved the constructive play element. My mummy was happy for me to climb high into the trees on a mission to make my mark. This activity carried an additional charge and we would have liked to see this included in the ticket price, I was just lucky that my mummy had some extra pennies with her. It was well worth it and I enjoyed the extra freedom of using tools. Lucky Daddy wasn’t there or he would have fainted at the sight of me with a hammer!

We spent over 40 minutes playing at Woodland Tribe while my Grandmother waited in the Zip Wire queue….she stood in line for over half an hour which was madness, however it was worth the wait with the look of pure joy on my face as flew down the line. I was buzzing afterwards and my mummy’s heart was in her mouth!

I enjoyed the free activity that Holmes Wood Play put on. Their mud kitchen was awesome and I had fun making mud pies, sloppy stews and witches broth with sticks and leaves. However with the rain getting heavier and heavier we were looking for shelter under the trees and wanted to head back to the centre of the festival to grab a hot drink.

With the weather closing in and the heavens opening we sadly missed Golden Lotus Archery and Fencing, Axe Throwing and the Branching Out Experience. I love tree climbing, so every tree on the way back to the food stalls I tried to scale! Freckles and Fire Wool School was packed especially as people took refuge in their bell tent so we didn’t get to participate and make things either which was a shame as I would have liked to have made a pom-pom headband.

The Art Trail was a bit of a wash out in the heavy rain and my mummy was disappointed in the displays expecting a lot more colour against the dreary weather. A lot of the ‘have a go’ art activities had been abandoned in the rain and we missed the chance to unleash our creative sides. Some more shelter would have been a good idea allowing families to sit out of the rain and craft. We’ve seen photos of the Art Trail in the dry weather and it looked wonderful in the sunshine!

The Tensile tents which hung from the trees were cool and people took advantage of the suspended spaces which offered shelter for wet festival goers. During the heavy downpour everyone headed to the large white marque on site to listen to Story Telling with Jon Mason. He was great and had a captured audience of children and big folk alike. There was an array of locally sourced food and we loved eating our lunch from Pizza Wagon, who made fresh pizzas in their very own stone oven inside a converted horse-box! We wanted to make the best of the woodland experience, so after our pizza we headed back out into the rain, sadly a lot of the festival atmosphere had disappeared with the number of festival goers depleted and the site appearing empty. After jumping in puddles and making mud monsters in the rain we decided to call it a day with the impending journey home.

We managed to spend a good couple of hours at the festival before the rain stopped play and the festival ended, if there had been more shelter and places to sit it probably would have encouraged more people to stay until the end. As we left at 5pm there were few people around which seemed a shame considering the lovely people we met there. We’ll definitely be back and its a great festival if you are local and enjoy outdoor activities. I think its safe to say that Into The Trees is a fair weather festival, though not as much fun in the rain.

Disclaimer: We were offered free tickets to Into The Trees in order to write an honest review. All onsite purchases and opinions are our own. 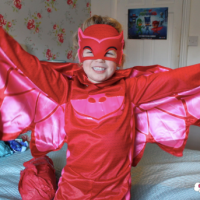