Dear Mummy, we love watching Dreamworks Madagascar at home and we have all of the films on DVD, some which have been on repeat this summer already! So when we were invited to watch Madagascar the Musical at the Kings Theatre in Portsmouth we were super excited and also super intrigued to see how it would translate onto the stage. Obviously the stage version cannot be a literal translation of the film. 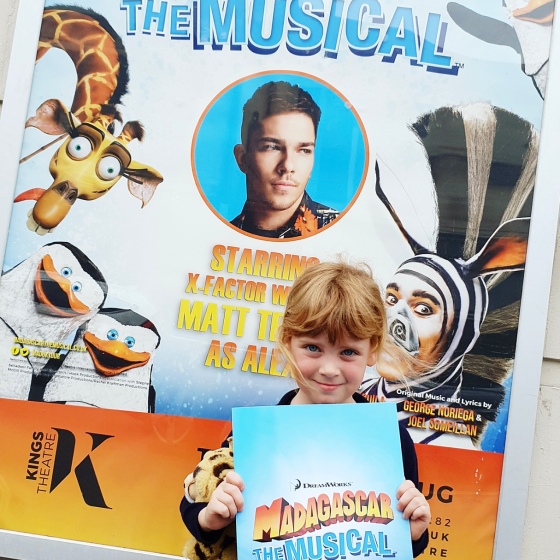 The show reflects the first Madagascar film, and follows the storyline of Alex the Lion (Matt Terry), Marty the Zebra (Antoine Murray-Straughan), Melman the Giraffe (Jamie Lee-Morgan) and Gloria the Hippo (Timmika Ramsay) as they escape from Central Park Zoo and find themselves stranded in Madagascar. While trying to make their way home they discover the meaning of friendship and what its like to be truly wild and free.

We loved the musical score and the catchy songs in the performance which had people dancing in their seats and me and my daddy singing along. The costumes were fantastic and looked just like the animated characters we are used to seeing on the screen, so much so that I actually had to rub my eyes in disbelief. I was impressed by the fab actors who played Melman the giraffe and King Julien (Jo Parsons) as they sang and danced encased in their puppets and made everyone giggle.

Even though the set was minimalistic with wooden packing crates as the main focus in some scenes we loved the changes of backdrops, skylines and props from the jungle of Madagascar to Grand Central and New York. Much of the set appeared to come out of the sides like unpacking the crates which was a great idea.

As a child I was happy that the acts were quite short at 40 minutes for Act 1 and 40 minutes for Act 2, with a 20 minute interval as it was perfect for my attention span and gave me a chance to stretch my little legs and grab a bite to eat in the foyer. Though be prepared to spend more than you would at the cinema for snacks, as the bar team told my daddy much of what we spend goes towards keeping the theatre going which made my daddy happier.

The first half of the show introduced us to the zoo characters, their escape and leads up to the Madagascar shipwreck. While the in the second half we met King Julien (my personal favourite) and his jungle crew. Special mention needs to go to the team and performers behind the penguin puppetry especially Shane McDaid who brought Skipper the penguin to life. Not only were they hilarious but they brought to life the animated characters to almost perfection and of course we laughed out loud at the “Smile and wave boys” line! All the cast did a fantastic job of portraying the original characters with Marty being the most convincing and my Daddy’s favourite, while I love everyone*. Whilst I’m sure they didn’t intend to mimic the animated characters it helped us little ones get sucked in even more. *(note from daddy, She especially liked Alex the Lion who Bella kept saying was handsome and Gloria who she thought was funny and beautiful. Bella was so pleased to meet them after the show at the stage door, thanks guys). 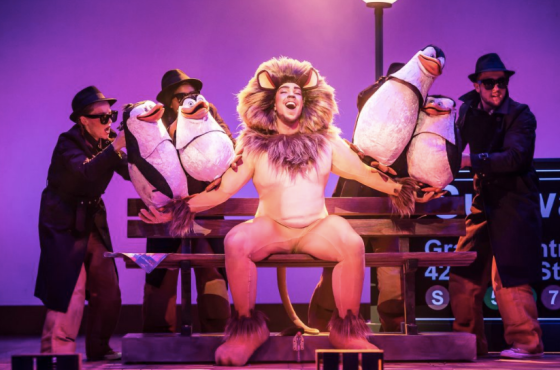 This show is the perfect way to introduce kids musicals.

Madagascar the Musical is at the Kings Theatre in Portsmouth from the 21st-25th August. Tickets can be purchased here and the rest of the tour dates are on the official website.

Disclosure: We were invited to see the show and all thoughts, boom shakalaka’s and bum wiggling in seats are our own. Plus we definitely like to move it move it!

26 thoughts on “Madagascar The Musical Review”

[AD] 🎉 Let the adventure unfold! 🎉 Check out the Map of Wonders! A BRAND NEW illustrated map of Britain for kids. 😍 It's a map of the funnest (mostly outdoorsy) things to do in Britain. <scroll to see>
[AD] Anti-Bacterial Slime?!? Who'd a thought it! @canaltoysglobal have come up with a novel way to use slime... as a hand sanitiser! Seriously. Playing with slime and sanitising my hands is a win win! It's so fun and stretchy and this anti-bac slime kills 99.9% of germs! <swipe to see it in action>
Happy Easter everyone! 🐣 Hope you are enjoying your long weekend! 💛 We’ve been lucky enough to get some glorious sunshine! ☀️ Now about to eat my weight in chocolate! 😆 Did the Easter bunny arrive? #EasterSunday #bunnyears #eastereggs #eggs #bunny #easterbasket #bodenbyme
[AD] Let’s get cracking on with the Easter Holidays! 🎉 I’m feeling super nostalgic that @charactertoys have brought back Jump It! 🤪 Do you guys remember it from the 90s?! 🙌 My parents do! ❤️ I can’t wait to try this new Jump It: Lap Counter from @smythstoys 👀 It’s perfect for a new generation and helps improve coordination, fitness & stamina in a fun way! 👍 It’s a great skipping game that can be played indoors and outdoors! 🤪 Place on your ankle, spin the lap counter ball, jump the cord and record your laps. I might even challenge my folks to see who can rack up the biggest tally! 😆 Keep your eyes peeled for my videos! #EasterHolidays #JumpItLapCounter #ActiveFunWithCharacter #JumpIt #outnow #EasterWeekend #ActiveKids #CharacterKidz #KidsActivities #outdoortoys #newtoys #games
☀️ Happy April everyone! ☀️ Spring is finally here and I can feel the sunshine on my face! ☀️ It’s been a loooooong winter and the warmth is putting a spring in my step! ⛵️We’re now venturing outdoors more, trying new things like paddle-boarding and open water swimming and I can’t wait to show you guys! 🏄‍♀️ #whereilive #southampton #daffodils #hamble #hambleriver #kidsoutdoors #easterholidays #staylocal #hambleriver #stronggirlsclub #smile
[AD] 🎶 I bet that you look good on the dance floor! 🎶 I’m certainly having fun experimenting with these NEW Shimmer N' Sparkle InstaGlam Dolls Series 2 Neon! Fashion dolls with REAL make-up inside. ❤️ If you haven’t seen my 80s Glam make-up unboxing video make sure to check it out 🔝 #linkinbio or my reels 👀 For your chance to WIN PRIZES 🤩 visit www.instaglamtoys.co.uk and join in with the fun activities and games! #charactertoys #Instaglam #characterkidz #InstaglamSeries2Neons #makeup #InstaglamSeries2 #InstaglamNeons #Instaglamdolls #newtoys #kidsmakeup
Hurry up Summer! ☀️ The weather can’t make its mind up and I’m hoping it’s going to be nice over the Easter holidays. 🐣 When lockdown is lifted I can’t wait to head into the countryside and explore! 🇬🇧 What are you guys doing over the Easter Holidays? ☀️ My mummy is desperate to go shopping and get her hair done! 🌈 #SpringIsHere #Rainbow #AprilShowers #ExplorerKids #Easter #Sunflowers #dearmummyblog #EasterHolidays #rainbow #aprilshowers #hampshire #hampshireblogger
[AD] Check out Totem Power Infernal! ⚡️ My head is still spinning from trying to stack these! 🌪 Experience spinning tops like you’ve never seen them before and take on the Totem Infernal Power Challenge. 🙌 Build your tower, stacking the tops in size order. 🤪 It’s a fast paced frenzied game and even my folks had fun trying to stack their totem towers! ⚡️ Keep your eyes peeled for my video! 👀 These are now available from @smythstoys and @charactertoys
[AD] Bouncing into the weekend like... 😂 Scroll to see my fabulous Moon Shoes! 🌙 They’re out of this world! *how many puns can I fit in?!* 🙈 I feel spacey and lightheaded 👩‍🚀 and love bouncing around the house on a rainy day! ☔️ Ideally these are for outdoors use but I’ve had fun trying them out! 🙌 Super exercise and even adults can wear them! 🤪 My mummy remembers them from the 90s! 🤩 A blast from the past! ✨ Such fun! Do you remember Moon Shoes? 🚀 They are available from @smythstoys now! @charactertoys #MoonShoes #newtoys #Saturdayfeelings #bouncing #moonboots #spacewalk #kidsindoors #90s #nostalgia #outdoortoys #90skids #characterkidz
[AD] 🎉 Check out my L.O.L. Surprise! Remix Dolls 😍 I’ve got a couple of Hair Flip Dolls to open and a L.O.L. Surprise! O.M.G. Remix Lonestar Fashion doll to play with! <scroll to see my unboxing> ❤️ Thank you @mgaentertainment for sending me through these girls to review! @lolsurprise.uk 🙌 The L.O.L. Surprise! O.M.G. Remix collection is available from @smythstoys and the @entertainer_toys and I already adore the packaging! 😍 Have you collected any from the Remix range? 🎤🎸🎧 If so who do you have? #LolSurpriseOMG #LolSurpriseOMGRemix #lolsurpriseomgremix #lolsurprise #collectlol #collectlolsurprise #lolsurprisedolls #dearmummyblog #lolsurprisecollector #toys #lolsurpriseremix #unboxing #toyunboxing #toyreview #kidinfluencer #collectomg