Dear Mummy, you know how much I love chocolate, so imagine my delight when a chocolate kids activity came through the door for us to test! 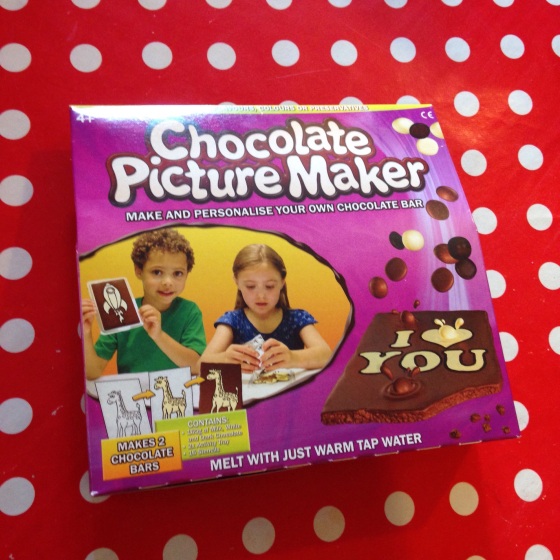 It’s a Chocolate Picture Maker from Zimpli Kids which allows anyone to create their own personalised 100% Belgian chocolate bar! Woweeee. It sounds cool and really innovative. 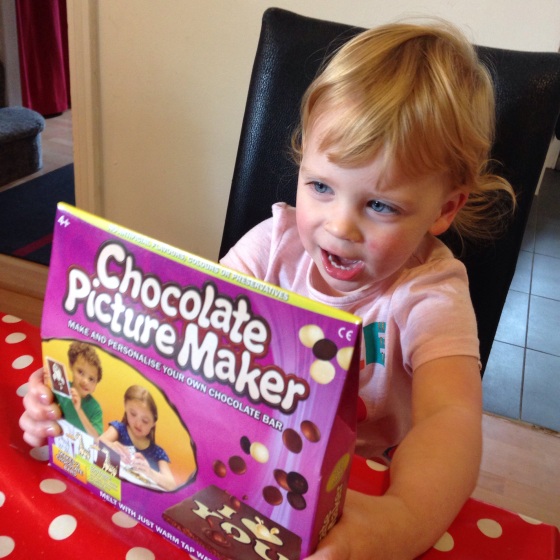 It comes packaged in a colourful purple box with a handy instruction booklet which includes a step by step picture guide. Also inside the box are foil sachets of chocolate drops for you to melt. 2 x dark chocolate, 2 x white chocolate and 2 x large sachets of milk chocolate ones.

It’s enough chocolate to make two large chocolate slabs. There are plenty of stencils included in the box and you can download them off their website too if needed. Also included is a clear plastic tray for the chocolate bar to set in. You can buy the Chocolate Picture Maker kit from Amazon at around £5 which is a real bargain considering you get two bars of chocolate. It’s also available in larger packs at ASDA and ToysRus.

The only thing we needed to source was a large bowl, scissors (to pierce the foil sachets) and some hot tap water to melt the chocolate.

This is what we did made our personalised chocolate bar using the Chocolate Picture Maker.

Step 1. My mummy filled a large mixing bowl with warm water from our kitchen tap. It doesn’t need to be boiling water to melt the chocolate only warm. Plus its safer if you don’t use boiling water, especially if little ones are making it. I helped hold the foil sachet under the water until they melted and used my little fingers to massage any undissolved lumps to make it all liquid in the pouches.

Step 2. Once everything melted after 5 minutes, my mummy took out the dark chocolate one and snipped the corner of the silver foil sachet to create a small hole in which she pipped out the chocolate into the clear tray which had a stencil underneath it for us to copy the outlines. At first she found it hard as there was a lot of air in the foil pouch, but eventually the chocolate came whizzing out. A bit too fast at one point and it would be easy to make a mistake, but if you did you could wipe it with you finger and lick it. That’s the beauty of working with chocolate! 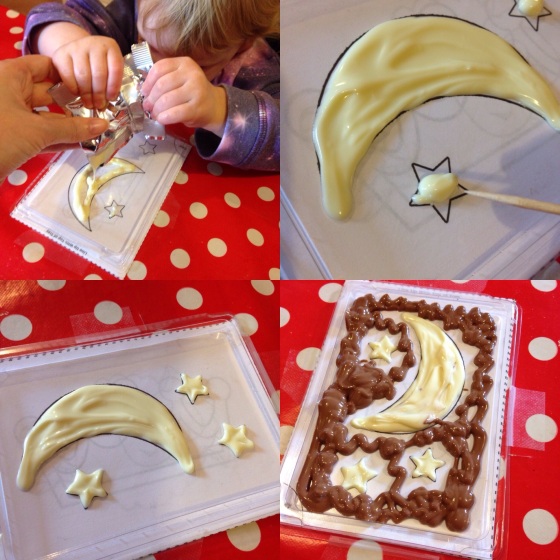 We spend ages drawing out the outline, scrubbing it out (licking it) and starting again. The stencil patterns come in easy, medium and hard. We chose the easy Stars and Moon stencil.

Step 3. We didn’t need to wait for the first layer of chocolate to set before we added the White Chocolate to fill in some of the stencil. This is where it got a bit messy and it was hard to get the lines to remain neat, so my mummy used a wooden toothpick to get all the angles right and to follow the line of the stencil. The white chocolate made up the moon and the stars on our design.

Step 4. We then added the milk chocolate to the tray and filled in the gaps, it didn’t matter it went over our design as it was going to be the back of the chocolate bar. After we were happy and smoothed it over with our fingers we laid the back of the clear tray on top, squashed it together.

Step 5. We then put it in the fridge to set. After 30 minutes it had gone hard so we took it out and swiftly consumed it.

We were actually really impressed with the final result and our first attempt. It looked good, even for a toddlers handiwork.

It didn’t last long as it tasted so good and it was very quick to melt.

We loved that the chocolate was good quality and not cheap horrible chocolate. It tasted smooth and not bitter. The 100% Belgian chocolate that made up our chocolate bars was gluten free and suitable for vegetarians with no artificial colours, flavours or preservatives.

They could have done with adding a small plastic chocolate tool to add the detail (like a tooth pick) in order to tidy up the lines and make the designed more detailed. Another clear tray would have helped too, which would have allowed two children to make it at the same time. My mummy and I could have both made our chocolate bars at the same time. It was a really good activity to do with a small person and any mess that was made was minimal and swiftly eaten up.

We would definitely recommend this as good gift to buy someone who loves chocolate! We’ve never made our own personalised chocolate bar before so this was a first for us and really good fun. My mummy is determined to make one for my daddy for his birthday which is coming up soon – he loves chocolate.

Disclosure: We received the product in order to write an honest review.