Dear Mummy, I had a blast over the Easter Bank Holiday weekend and even though I feasted on lovely chocolate eggs I also got the opportunity to burn them off running around on Easter eggs hunts. One of my favourite hunts was searching for brand new Smashers Series 3 Dino eggs which were kindly sent to us from Zuru Toys. 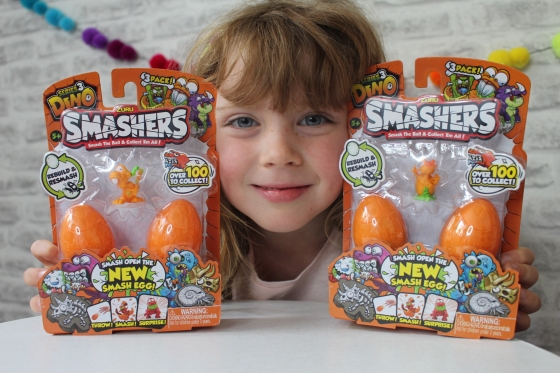 Having fun with Smashers Dino Series 3

My folks organised an outdoor easter egg hunt and instead of using chocolate eggs we used these instead which in my opinion was much more fun. I was an archaeologist for the day with my magnifying glass as I slinked around the grounds of The Vyne, a National Trust property in Basingstoke hunting for these brightly coloured eggs. Each Smash Egg was shaped and decorated to look like a prehistoric dino egg. 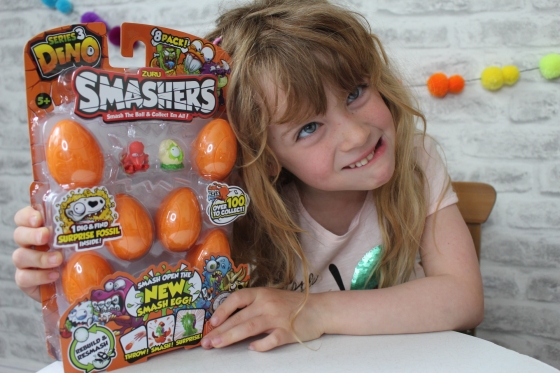 Inside these Smashers dino eggs was a surprise collectable toy! With 100 characters to collect across 9 categories, including mutants, robots, and fossils I was excited to see what I discovered and had fun smashing my Smashers on the ground and against walls (not mummy, daddy or my friends!). They make a really satisfying sound!

A great thing about these eggs are that they can be rebuilt for infinite re-smashes adding to playtime and lasting way longer than chocolate after Easter! I’m still playing with them and love looking at all the rubber characters and cool colours of the miniature figures.

With my pooping Smash Rex Dinosaur!

If the eggs weren’t enough we were also sent a roarsome Smasher Smash Rex playset (which also contains 2 Smashers) RRP £19.99. This dinosaur is brilliant and you feed him the eggs and he gobbles them up and then poops them out with the shell all broken revealing the treat inside! 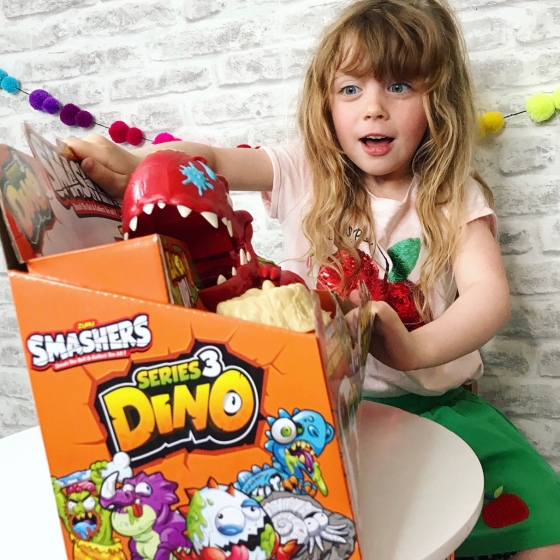 Proper excited to be unboxing!

He also made funny sounds of him chomping, burping and farting them out which lead to fits of giggles from my folks and me. Just make sure you read the simple instructions on the back of the box and make sure you don’t overfeed him He attracted a lot of attention when he came with me on the hunt!

See the Smash Rex dinosaur in action on my video below!

Smash Rex eats the eggs by tilting him forwards, then backwards to swallow it. Pressing the white egg down on his back firmly starts the mechanics to devour and break open the shell and then he poops it and it comes out of his bottom! The Smash Rex playset contains two exclusive Smashers and collector’s guide as well as the large dinosaur figure. There’s also a Smash Egg Rebuilder shaped like a nest to help you rebuild the eggs and play again. 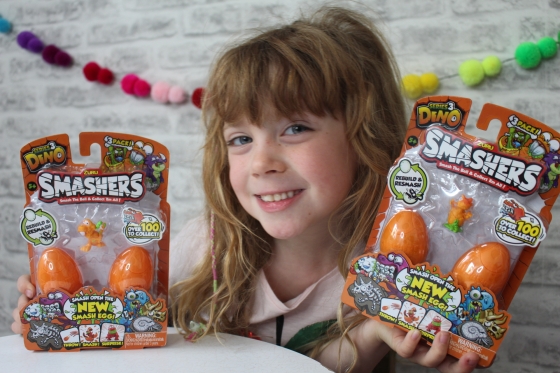 Lots of different packs to collect

The collector’s guide sheet is super helpful with pictures so you can easily tick off the ones you collect and find out if you’ve found a rare or ultra-rare Smashers character. There’s also a Smashers app you can download for even more extras. I was lucky to find some rare ones and an ultra rare clear figure! Watch my video below to see the little characters in action. 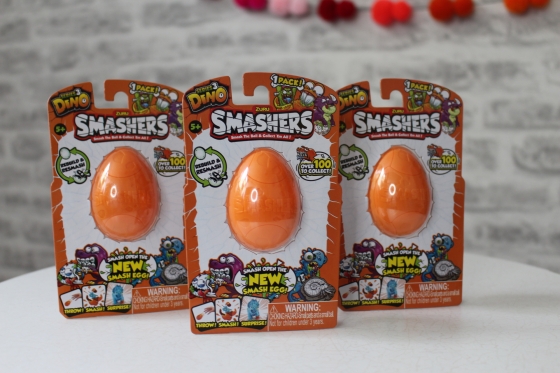 You can buy the Series 3 eggs in all kinds of different gift bundles. Inside a one-pack (£1.99) you get 1 x exclusive smasher egg, 1 x smasher character and 1 x collector guide. You can also get 3 packs (£5) and 8 packs (£12) which make good pocket-money toys and there’s something for everyone’s budget including a whooper 20 pack!

These are produced by ZURU Toys and would make great birthday presents and stocking fillers. The multi packs show some of the Smashers figures but the rest are hidden in the eggs and all are available from all good toy retailers and online. 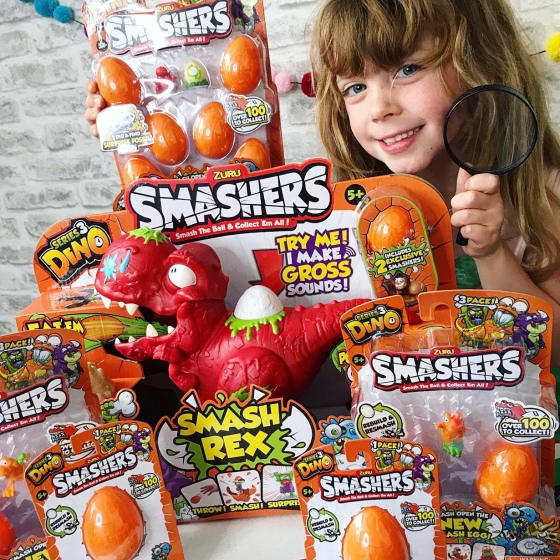 Out of all the ranges so far I’ve enjoyed Smashers Dino Series 3 the best and these dino eggs are definitely more appealing to me as I love dinosaurs! My mummy still likes the Smashers Gross Series 2 the best as she likes gross things and slime!

So what do you think of these cool toys? I was lucky enough to discover an ultra rare see-thru character in my unboxing video above, can you guess what one it is? I havent yet mastered the technique of rebuilding the eggs on my own, but we like that ZURU TOYS have thought about the waste implication by including instructions on how to reuse the shells. It would be awesome if they were magnetic and just clipped back together making it easier for little hands *hint hint*.

Disclosure: We were sent these ZURU Smashers Dino toys in order to review. All photo, video and roars of laughter are our own! 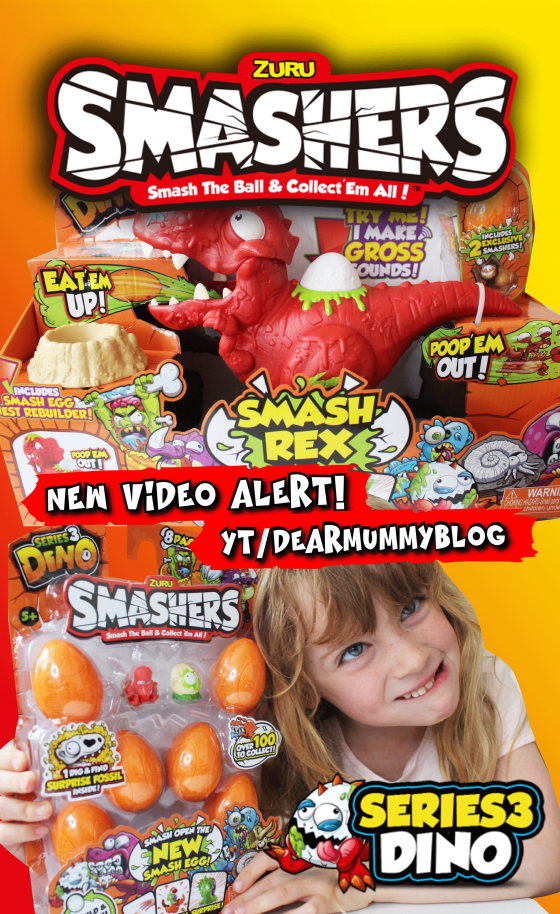