Dear mummy, this is a chapter of our lives I’m sure we’d rather forget but worth documenting. The road to recovery can often be a bumpy one. After my mummy’s last hospital stay eight weeks ago (see posts here) tragedy struck again and led to her second lung collapse. Fast forward a couple of weeks and she is back home after undergoing lung surgery at the John Radcliffe Hospital in Oxford.

Doctors concluded that as this was her second documented spontaneous pneumothorax (collapsed lung) the likelihood was she would be plagued with reoccurring episodes until she was fixed once and for all. A pneumothorax is a collection of free air in the chest cavity (thoracic cavity) that causes the lung to collapse. It is called a spontaneous pneumothorax because there is no rhyme or reason why is happens and may occur in people who are young and otherwise healthy, like my mummy.

My mummy has had many small spontaneous pneumothorax’s in the past and they have always resolved without treatment caused by air blebs bursting on her lungs; however the past couple of episodes have ended in the insertion of a chest tube to free the air in the chest cavity.  But enough was enough and we couldn’t resume normal family life with the thought of another episode plaguing us. So my mummy had surgery called a mechanical pleurodesis with a camera (video-assisted thoracoscopy or VATS) through keyhole surgery. This procedure was done to prevent another pneumothorax from occurring in the future for my mummy.

Mechanical pleurodesis causes inflammation and scarring by mechanically rubbing the parietal (outside) pleura with gauze. The idea was to obliterate the space between the lung and the chest cavity wall (the pleural cavity) so that fluid (water, blood, or pus) could no longer build up between the layers. Pleurodesis is a procedure that is designed to get the two layers of the lung lining (the pleura) to stick together. It was very painful and uncomfortable there is no denying it and the surgery lasted a couple of hours however the recovery period in ICU lasted nearly six hours trying to get pain management under control once she woke up. 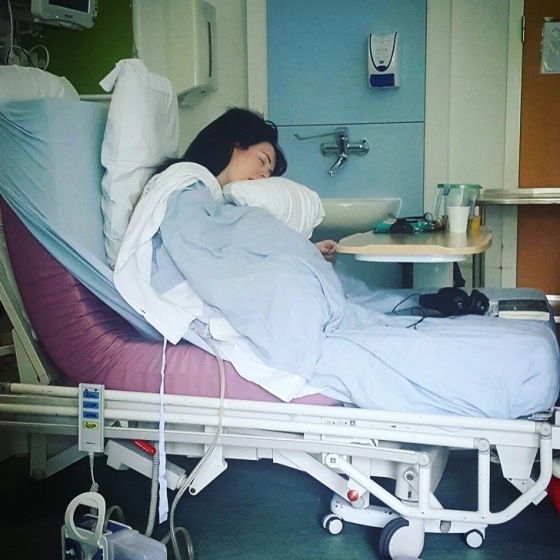 Surgery was scheduled with a specialist team and after a bumpy ambulance transfer from Basingstoke Hospital up to the Heart Unit in Oxford she went under the knife. This surgery would greatly reduce the likelihood of a persistent air leak and prevent a recurrence, so the whole family backed the decision. 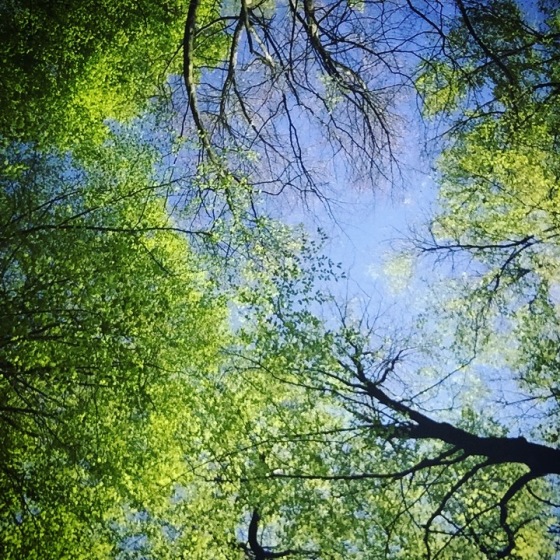 My mummy has been through the mill and we were glad to leave hospital having seen the inside of wards for nearly eleven weeks on and off. But recovery has been hard. The surgeon has asked her to keep walking and exercising each day to keep herself out of breath. This means she has started to go on little walks around the house. 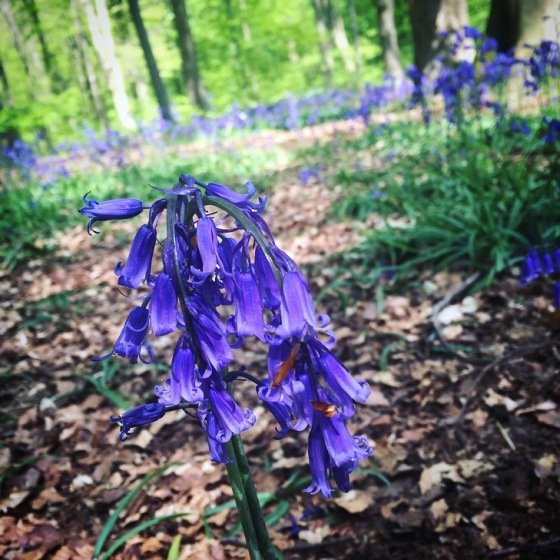 She was lucky enough to get further afield when Grandma took her out into the woods in Micheldever to see the bluebells. How time has changed, as this time last year we were exploring the carpet of blue and running around playing. This time she hobbled down pathways led by a very supportative Grandma.

We joked how the bruises were also blue like the bluebells, as she filled her lungs with the crisp clean air walking through the woods. It was so good to feel the sunshine on tired bones and it lifted her spirits for a little while.

The majority of her bruises have come out now from all the cannulas and taking bloods. My mummy’s chest is sore and tight and walking is with baby steps but it’s good to be back outside in the sunshine. We wouldn’t wish this on our worse enemies and the pain at times has been unbearable and we all have a new-found empathy for people who stay in hospitals and go through chronic pain.

Hopefully this is the end of her lung troubles and the surgery has fixed the problem once and for all but a little part of us is still unsure. The summer should distract my mummy enough to forget her woes and we can’t wait for all the festivals and events we have planned later in the year. But for now it’s time to rest and get better, one breath at a time.

32 thoughts on “Bruises and Bluebells – Life after Lung Collapse”

🎃 It’s my BOO BASKET! 🎃 Thanks @johnlewis for helping us put it all together. 🙌 Filled with sweet treats including some lovely stuff from @hotelchocolat I can’t wait to snuggle up with a scary movie! 🎬 We had so much fun visiting and finding all these goodies at @westquay 👻 NOW I’m ready for Halloween Half Term this week! 🤩…. However I did get distracted by the John Lewis Christmas Shop section! 😂 It’s looking mighty festive already! @johnlewispr 🎄#westquay #johnlewis #boobasket #southampton #boobaskets #westquaysouthampton #halloween #sotonbloggers #hampshire #sweets #dearmummyblog #johnlewisandpartners #halloweensweets #thelittlestblogger
🖤 We took a trip down to our local LUSH store in @westquay and picked up some spooky treats! 🧡 My bath times are definitely going to be fangtastic this Halloween! 👻 @lushsouthampton 🙌 Pictured is: Punkin Pumpkin Bath Bomb 🎃 Screamo Bubble Bar (which blows bubbles) and Worry Monster Bubble Bar! 💜 Spooktacular! #LushHalloween #sotonbloggers #Lushaddict #lush #bathbombs #halloweenbathbombs #lushlife #halloweengoodies #dearmummyblog #thelittlestblogger #boobasket #sotonbloggers #westquaysouthampton #southampton
🎃 Look at them pumpkins! 🎃 Our feed is FULL of these glorious orange globes! 🧡 We’ve already been pumpkin picking this year and ready to start carving them next week for Halloween Half Term! 🙌 Stencils at the ready! 🤣 What will you carve into yours?? 🎃#pickwellfarm #pumpkinpicking #southampton #pumpkinpatch #bodenbyme #sotonbloggers #halloween #halfterm #daysout #hampshire #dearmummyblog #thelittlestblogger
[AD] 🧬 I’m loving the Science Mad! range of activities from @trendsuktoys 🧬 Check out my new YouTube video to see the metal detector and walk talkies in action on the beach! #linkinbio 🔬 These fantastic science kits are available from @veryuk 🔭 and you can find the walkie talkies on @amazonuk 🙌 #trendsuktoys #sciencemad #girlsinstem #stemgirls #stem #stemeducation #steameducation #kidsinscience #kidsactivities #dearmummyblog #educationaltoys #learningthroughplay #thelittlestblogger
Hello everyone! 👋 These are my crazy folks, Alex and Dawn! 😂 They give me a hand with all my videos, captions and pictures. 📸 They are usually the ones behind the camera! 🎬 Just a little reminder that this account is managed by my folks 🙌 and they are here to answer any questions on my toy reviews and help on my blog www.dearmummyblog.com 🎉 x If you haven’t guessed they also put into words what I’m thinking and saying… 😂 #contentcreators #adultsincharge #dearmummyblog #thelittlestblogger #behindtheblog #behindthebloggers #meettheteam #meettheparents #mummyanddaddy #hampshireblogger
[AD] ☀️ Colour me with sunshine! ☀️ It’s pretty dreary out there at the moment! ☔️ So I’m brightening up my drawings with rainbows! …of course! 🌈 A kid can never have too many pencils! 🎨 Thanks @maped_helix for sending them through to me! 🌈 I’m going to have a lot of fun this half term! 🧡 *Caption written and comments managed by Mum, Dawn* #rainbow #dearmummyblog #creative #rainbowpencils #rainbowcraft #rainbows #stationery #stationeryaddict #colourpop #thelittlestblogger #colouringpencils #halftermfun #halftermactivities
[AD] 🍂 Over the weekend I visited West Green House Gardens in Hampshire and loved it! 🍂 @westgreenhouse
[AD] 💎 Are you ready to be dazzled? 💎 Introducing the cutest plush pets around! 😍It’s P.Lushes Pets from @spinmaster @p.lushespets #PLushesPets
[AD]🦇Have you seen the amazing @partydelightsuk Halloween range?🦇
[AD] 🎉 It’s the Science 4 You 'Be A YouTuber' kit! 🎉 I can’t wait to take my science experiments to the next level and become a science celebrity!